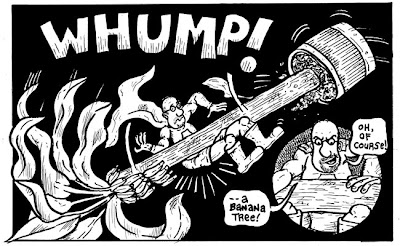 Art by Committee is a sketch game group I belong to. This is how it works -- a random line from a sci-fi novel is posted. We have no idea what book it came from or in what context the sentence occurs. Then everybody in the group draws their own interpretation of the quote. I actually come up with a lot of ideas that way.

This month's quote was: “I lashed out with my left arm, clutched at something thin and hard, tore at it; the next second a banana tree fell across my chest. But the pain was…”

I've already posted my entry for this, but I thought some of you might like to see some of the other entries, including this one by Dave Harshberger. 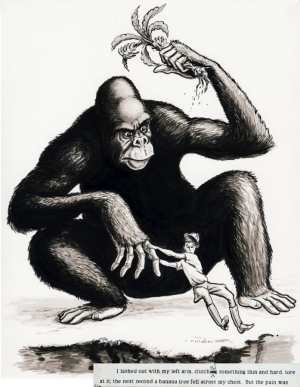 The quote for next month is

“Behind the bar, polishing four glasses at the same time with his blue tentacles, was the Tookah. Two of his three eyes didn’t bother to look up, but it was the third one, the upper eye, the sleepy one that appears bored by everything but never misses anything. That one sleepily looked over at me and then blinked and opened wide.”

If you would like to join in the fun, the deadline is April 12. All other details can be found at the Gurney Journey.
Posted by Unknown at 3:37 AM

Haha! Nice! I used to work at a YMCA pool in Memphis. A patron who raised banana trees would bring them to the indoor pool because we had crazy high ceilings, insane humidity, and ceiling high windows that let the light in. They made the pool smell so sweet, but they were taller than me even in the lifeguard stand, and once they bloomed, they would die and fall slowly. But I'd always be afraid the really tall ones would get too top heavy and would fall on me when my back was turned :-)