Donkeys and Elephants -- The Political Scene 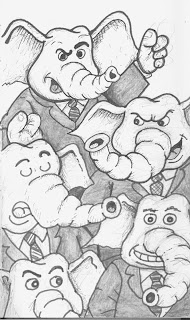 I did this first drawing in my sketchbook early in the campaign season. My initial impression of the Republican side was that the field was crowded with candidates, eying one another suspiciously, jockeying for position -- and that they all looked the same!

The second drawing is my statement about the part money plays in the political process (for both parties). It makes me sick to hear about the millions that are spent on campaigns. Think of the problems that could be solved by diverting that money directly to the problem! An individual with a personal fortune (like Mitt Romney) can spend their way to the front of the pack. For the rest of them, where does this money come from? Special interest groups -- or, individuals within those groups. Nothing will be done about the oil situation by the candidate who has received millions from that particular group! For the rest of the candidates, it's the same story. Whoever they've received tons of money from has them in their pocket. I did the donkey sketch just after the Iowa Caucus. It was fortuitous that I ran out of room and could only write Iow -- which is almost "I owe".

I know I'm not an expert by any means. These are just the rantings of a disgruntled spectator of the political scene.
Posted by Unknown at 3:36 AM