Super YOU! -- Draw Yourself as a Superhero

On Saturday I went to the Norman Rockwell Museum in Stockbridge, MA with my sons Daniel and David. I had been invited to teach an art lesson as part of their Family Day activity. As we entered the museum, we saw a poster advertising the activity. I said to the boys, "Did you ever think you would see art that like that in a museum?" 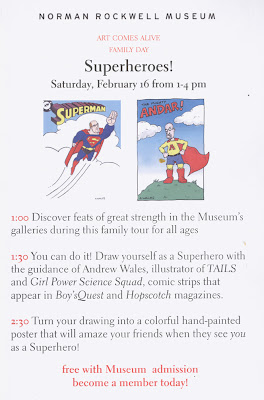 The activity was organized to celebrate their current exhibition of the art of the graphic novel. Melinda Georgeson started things off with a tour of the superhero art in the exhibit and some brainstorming activities with the kids who attended with their parents. Then we went to the art classroom downstairs where I showed a quick Powerpoint slide show and gave a little art instruction. I showed how basic shapes can be used in cartooning to make dynamic poses and then everybody dove right in. 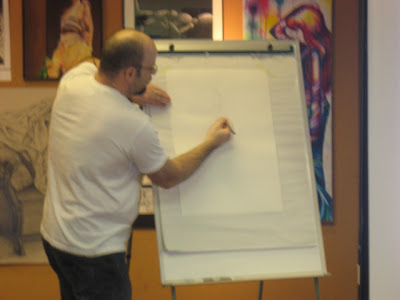 I called the activity "Super-YOU!" because I think there's something super about everybody. I think it was a fun way for everybody there to express themselves and be creative. We all celebrated the things about ourselves that make us unique by creating a superhero inspired by something unique about us -- an interest, a hobby, a nickname, etc. 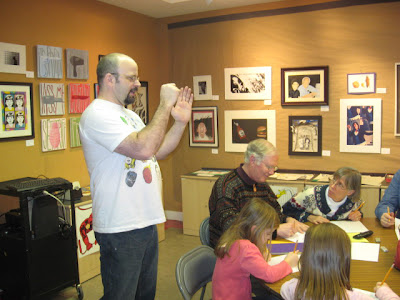 In the picture above, it looks like I'm demonstrating something important, but my son reminded me that I was trying to show someone where Athens is on the Pennsylvania map. People always want to know where you're from. When you're from Athens, it's hard to explain. 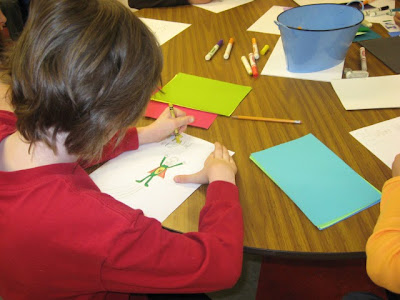 I was really amazed at the creative ideas the kids had. They were not reluctant at all to get started. First they drew a design in pencil and marker. Then they made big posters on oaktag with tempera paint. 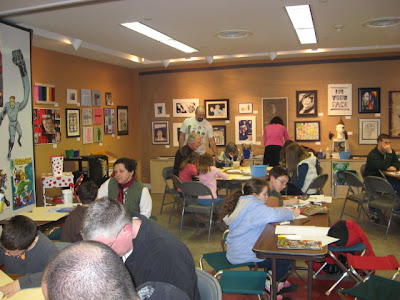 I'm told there were a record 82 participants. There were "kids" of all ages, and most of the grandparents and parents weren't bashful at all about making a poster of themselves as a superhero. We had Golf-Man, Yoga Grrrl, Nature Woman, and several other really neat ideas from the "big" kids. 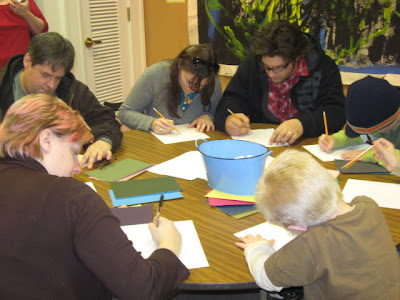 It was a really great day for families to enjoy time together doing something creative and take in an art exhibit. It was an honor to be invited. I've always wanted to go to this museum and I don't know when I would have gone if not for this opportunity.
Posted by Unknown at 7:59 PM

I believe your crowd estimate is excessively modest. Melinda told me today that your workshop had a record 86 people go through it on Saturday!

No wait... maybe she said 82. Either way, it sounds like it was a huge success!

What a great post! I like the project alot - you ARE the mighty Andar! I sent your blog address to my 3 student teachers. You're a good role model. Rainmaker!

Thanks Marek, for the info. I changed the info in the post. Now that I think of it, there were some who finished and left, and others who came late.

Thanks, Paul. Anna said I might get to present Comics in the Classroom at an MU workshop some time.

She came up with the idea of letting kids put together their own Super-selves and having the costume mailed to them.

She was just on the Big Idea with Donny Deutsch last night discussing it.