I find it interesting when I discover other artists from American history with the last name of Wales. I'm not sure if they are related to me or not -- possibly they are "shirt-tail relations". My son Dan discovered this one in an Encylcopedia of Biography at school. James Albert Wales was a cartoonist! That book said that "he was tall and ruddy-faced, with a silky turned-up moustache and wore pince-nez." His photograph is below. 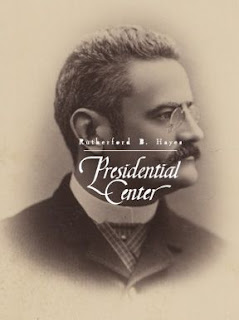 The info below is from the Ohio's Yesterdays website, including some of his cartoons. For 19th-century Americans, politics was entertainment. There was no TV, radio, cable, video, or You Tube, but just the same, everyone knew what was happening. Newspapers and political journals, like Harper's Weekly, Judge, Puck, and Frank Leslie's, were read and shared at general stores, taverns, and blacksmith shops, - wherever people gathered. Those who could read, read to those who couldn't. Key to forming their arguments and shaping their opinions were the wildly popular political cartoons featured in every issue. They were understood by everyone!
Created by skilled imaginative artists, the cartoons attacked politicians, presidents, and policies with wit, humor, and intelligence. Through delightful caricatures, they poked fun at society's extremes of poverty and wealth, corruption and reform. Most influential was Thomas Nast, but among the prominent was Sandusky County's own James Albert Wales.

Born before the Civil War, Wales grew up in Clyde, drawing on the counters at his father’s fish market. After a short stint at a Sandusky business school, Wales headed for Toledo where he learned engraving and then to Cincinnati to improve his drawing skills. Wales paid his dues, working for a time in Cleveland and then Chicago, where he found his niche. But his ambitions were quickly snuffed out by the Chicago Fire.

It was in Cleveland, while working for the Leader during the 1872 presidential campaign, that Wales got his first taste of success. Wales soon found himself in New York, drawing for the nationally recognized Frank Leslie’s Illustrated Weekly - the first American venture to bring together news and images. Wales then spent a year in London, drawing for illustrated journals and studying in Paris. Shortly after his return, Wales was hired by cartoonist Joseph Keppler, editor of the popular Puck. 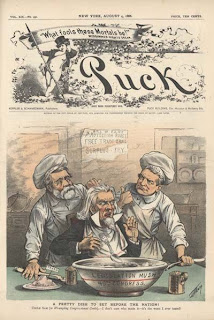 It was during his years at Puck that Wales established himself as one of the foremost political cartoonists. Gifted at caricatures and portraiture, Wales created a full page political cartoon series that he titled Puck’s Pantheon. He soon was drawing double-page spreads and front and back covers that influenced Americans' thinking on social and political issues.

In 1881, following disagreements with Keppler, Wales left to become one of the founders and chief cartoonist of The Judge. After a strong start, Wales found himself in financial difficulty. And in 1885, he sold the magazine and returned to Puck. With financial backing from the Republican Party, The Judge began to thrive and soon passed its rival in popularity. Unfortunately, its founder, James A. Wales, would never see his creation reach its full potential – or perhaps his own. He died within the year of a heart attack – at the young age of 34. Interestingly, Wales was the only native-born American to achieve national prominence as a political cartoonist during the Gilded Age.

This is not the New York Stock Exchange. It is the patronage Exchange, called U.S. Senate.

The biographical encyclopedia says that "there is little question that if he had lived he would have been recognized as one of the foremost American caricaturists."

(You can see from this cartoon that he sometimes signed his name JAW).
Posted by Unknown at 1:18 PM