When I was a kid, my parents encouraged us to read and pursue our own interests. One way they did that is by providing lots of reading material -- even "fun" reading like comics and humor magazines. They weren't stingy when it came to stuff like that and I think that's why we all became readers.

I liked comics, of course, and I also enjoyed reading books made by cartoonists. My favorite cartoonist was Sergio Aragones. He's the artist who drew (among other things) the Mad Marginals. If you've ever looked at Mad magazine, there's little tiny spot cartoons in the margins. The great Sergio Aragones has contributed cartoons for every issue of Mad since his debut in 1963, except for one issue. The post office actually lost the artwork Aragones created for that issue. As he approaches his 45th year anniversary of working for them, that's quite a record!

As a kid, I looked forward to seeing his work in every issue of Mad, but imagine my delight when I discovered paperback collections of his work in book stores! I liked how he always drew himself in a self deprecating way. 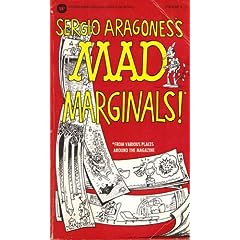 I had all of the books shown above and more -- and I still have a few of them!

When my older sisters were little, my dad actually took an old chicken coop and remodeled it to make a "play house". There was even electric lights and outlets in there. When my younger brother and I came along, we took it over, and re-enacted many western movies there. When we outgrew that it became my summer studio. I'd sit at a desk and make copies from the Aragones books -- one after another. Then one day I discovered, I could just think of something and draw it. It even looked a little like how Sergio would have drawn it! To this day, I think I see his influence in my cartoons, although I'm not as fast as he is!
One day I in the late 70s I was passing a comics rack and stopped dead in my tracks -- I discovered that there was a new comic book called Groo -- drawn entirely by Aragones! Groo was a spoof of the Conan and Sword & Sorcery comics. I collected that comic for several years. I really liked how he took a character type that was supposed to be super-heroic and made him goofy.

At 70, Sergio is still very prolific. He's had a prodigious career that includes virtually every major cartoon award—he’s received a National Cartoonist Society Reuben Award, multiple Eisner Awards and is a member of the Will Eisner Award Hall of Fame. In a recent article, Aragonés revealed his indefatigable optimism. "I love what I do. It's like doing it for the first time every time I do it."

Wow, I can really see his influence in your work. Very cool...

Time sure flies when you are having fun (and Sergio Aragones' cartoons and comics have always been fun), so it is understandable that you might think Groo has been around longer than it actually has.