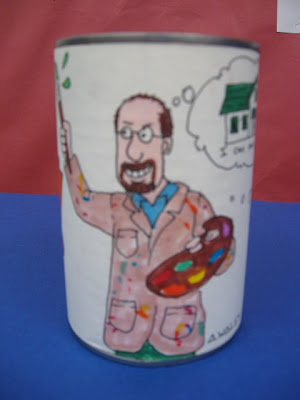 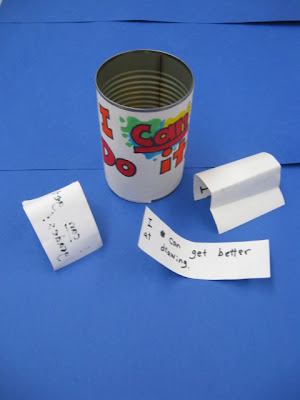 -- not in "can nots"! They say that people who write their goals down are more apt to achieve them. I wondered, would it be possible to create an art lesson that encouraged children to set goals? I came up with "I-Can-Do-It Cans".
On the outside of the can, we drew ourselves with images that represented our goals. I told the kids that they were magic. If they wrote down what they wanted to achieve in sentences on slips of paper, and if they put them in the cans -- they just might come true!
You might think I was pulling their leg, but there's a lot of truth to this. I read a book once called Write it Down, Make it Happen by Hennriette Anne Klauser. This book explains the science behind why this is true.
There's a part of our brain called the reticular activation system,

...you can deliberately program the reticular activating system by
choosing the exact messages you send from your consicous mind. For example, you
can set goals, or say affirmations, or visualize your goals.

Have you ever noticed that after you buy a car of a certain model and color of car, suddenly you see cars just like it everywhere. They were always out there, but now you notice them. It's the RAS that's involved there. Likewise, a mother can hear a baby cry from several rooms away and know whether it's her baby or not!
Why does writing your goals down make it more likely that you'll achieve them? In my own words, I guess what happens is that by writing your goals down, you're clarifying in your mind exactly what you want. Then the opportunities to get toward that goal stand out more clearly.

I know they say to set realistic goals, but I figure it doesn't hurt to write down things that might seem wildly implausible. I notice in my own I-Can-Do-It Can from years ago that I had drawn and written that I wanted to own a house. That seemed impossible due to financial circumstances at the time, but it's happened!
What goals will you set for this new year?
Posted by Unknown at 9:50 AM

There's definitely something to this. Around New Years, as my wife and I were rearranging the furniture in our tiny apartment (seriously, it was like one of the tile puzzles where one square's missing and you move the rest around until you make a picture) and we found a list priorities we'd set for ourselves the New Years before--I say "found," but really it had just been magnetically hung on a cupboard door.

While the majority of things were like, "Pay such-and-such bill off," or "Only eat out once every other week," at the bottom we listed the guilty pleasures we wanted: a new TV (the old one was displaying green picture), a new laptop for my wife with design software so she wouldn't have to "live" in the campus editing lab, a dog, a PlayStation, and a new microwave.

When we looked over it, we suddenly realized that we'd accomplished almost everything on that list (the bills did get paid off, we managed to save a lot of money, and we got almost all of our little "happies"--sadly, still no dog). I never really thought about it until reading your post, but that list was someplace I looked every day--to get my morning cereal, a can of green beans, etc. And I think seeing those goals, even subconsciously, is what made them obtainable.

Shortly after "finding" said list and "realizing" our accomplishments, we made one for 2009 :-)

Great story! -- and a testimony to the power of setting goals. Ah, the life of a young married couple recently employed. Someday you'll really laugh about the days you lived in a tile puzzle apartment and watched a green tv!

This may sound WAY off topic, but there's an interesting youtube video of an Orthodox priest talking about prayer, addiction and brain chemistry that fits with what you're talking about here. (The main idea is about the 1:45 mark)
http://www.youtube.com/watch?v=ZUrvObw53bw

Haha! Thanks Andy. Sometimes I get carried away and realize, only after clicking "Publish Your Comment," that's I've written a novella on your post :-/

We really try to relish in the simplicity of our lives, because we know it can only get more complicated from here :-)

Please don't apologize! I enjoy your contributions to the discussion -- which is what this site is all about!

I wouldn't say it's off topic. In our culture we tend to make a dichotomy out of mind and spirit, which I don't think is meant to be. I enjoyed watching the video. My favorite Bible teacher is Joyce Meyer, who has some great teachings on how "words are containers of power". It's very biblical, and these great thinkers and divinely inspired people, though they did not have access to recent brain research -- have offered guidelines for living that are really "brain based".

What a great lesson! (Who ate all the soup?) I wish I would have thought of it many years ago. Everybody needs a "magic can."