A Whole Lot of Super Going On 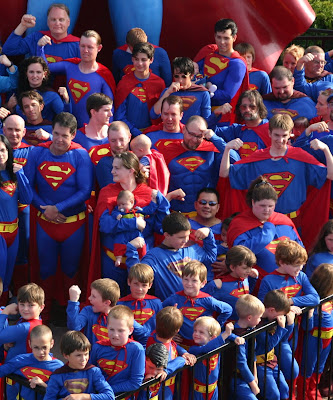 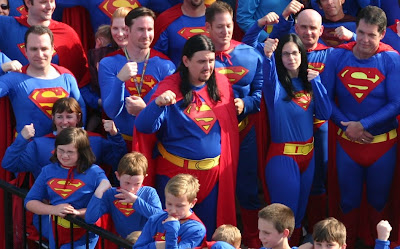 There's nothing funnier than someone wearing a Superman suit. The less super they look, the funnier they are.

The city of Metropolis, Illinois planned to set the Guinness Book of World Records record for the most people in a Superman uniform . Even though there was no existing record, there were a ton of rules established for setting the first one.

The minimum necessary was 100 people and they had to wear authorized Superman costumes. No red towels for a cape with a hand-drawn “S” was permitted. The Guinness folks are a might fussy. And it had to be a SuperMAN costume, no SuperGIRL costumes were allowed.

Awesome! Any word on the final count of the record they set?

The final count was 122 super men, women and children!

Andy, just wanted to tell you I got a real kick out or your "Bored" cartoon on Gurney's site today. Thanks for a reflective chuckle.

This is hilarious! I love the chubby girl with the lack of expression.