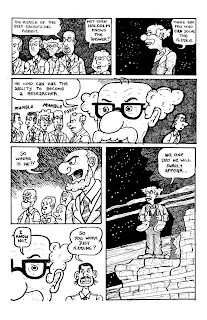 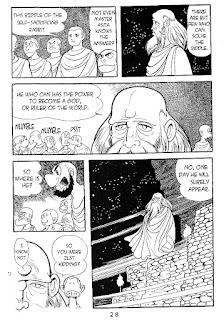 The original by Osama Tezuka

The Re-paneled Blog is one where different artists redraw comic pages originally drawn by classic comic artists.  My entry was chosen for Wednesday's post there. I "re-paneled" or redrew a page from Buddha by Osama Tezuka.  What I like about that book is that it is the story of a spiritual leader, but with a lot of humor and slapstick.  I like how he used goofy cartoon characters in settings that were often extremely realistic and detailed with beautiful pen work.  I am usually not a manga fan, but I admire Tezuka. He has been called The Walt Disney of Japan or the God of Manga. He is known for creating Astro Boy and many other characters. In his lifetime, he drew 50,000 pages of comics.

I did this project as a learning exercise.  He definitely has some panel compositions that I wouldn't have otherwise thought of.  As I did it, I replaced many of his characters from my own work -- including Halcolm and myself.

Very cool. You really made that page your own.

On a side note, how is Buddha? It's on my reading list.

Excellent - I'm more drawn to your version because of the greater contrast - and your characters are more fun!