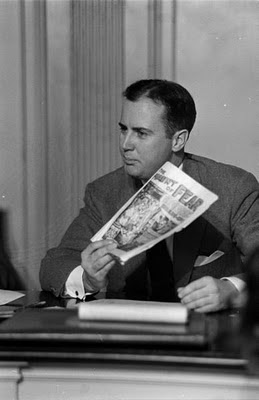 In my master's research project, I wrote about the history of comics, including the anti-comics campaign conducted by all kinds of crusaders from 1945 to 1954. This actually culminated in congressional hearings. I wish that when I was writing it, I had known about the articles excerpted at Yesterday's Papers. In Part I and Part II John Adock disects the criticism of comics, which is laughable by today's standards.

For instance, one article from 1945 begins,

“Every great police department makes the reading of certain ‘comics’ a ‘must’ because the crime pattern delineated by the cartoonist is certain to be followed by youthful imitators of the villain depicted. If parents would like to explain the erratic behavior of their children, let them do as the police do and learn from the ‘comics.’” - The Rev. William A. Gorey, pastor, St. Sabina Church, Chicago. (Southtown Economist, April 1945).

These articles described several objectionable scenes, which are published online side by side with scenes from the actual comics panels at Yesterday's Newspapers and at Words and Pictures. These comics include outrageous stuff like the comic below: 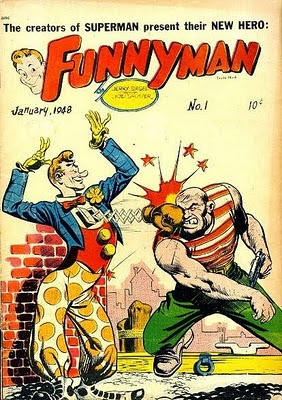 “To read some of these comics is to be lost in a labyrinth of Freudiana, a sickening reminder of the depths to which human imagination can sink,” said the Church of England Newspaper, the unofficial publication of the United Church on 13 Oct 1954.

In the final analysis, the problem is one that faces each parent in the privacy of his own home. He must solve the problem himself, in his own way. But he must solve it. The alternative is a child mentally and morally imperiled. (Southtown Economist, April 1945). 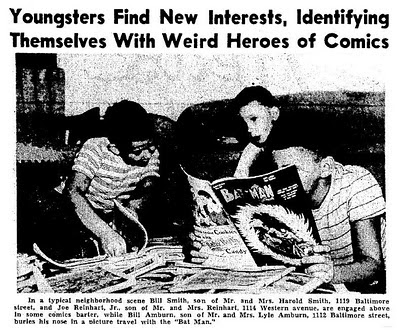 These excerpts illustrate how there were a lot of very vocal people who maintained that comics were the cause of many of the ills of society. After rock and roll music came along, they had a new scapegoat, but unfortunately all this hype did a lot of damage to the comics industry at that time.
Posted by Unknown at 5:56 AM

I love how worried these people are about kids that they publishes their home addresses in the news articles; ah, simpler times ;-)

Have you read Chabon's The Adventures of Kavalier & Clay? There's a great bit in there that really goes through what those hearings were like and what they involved.