Scenes from the Small Press Expo 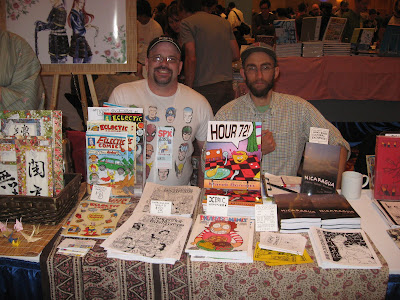 I've always wanted to do a big comics show. I applied to the Small Press Expo (SPX) in Bethesda, MD, but they filled up too fast. When my friend Marek Bennett found out, he offered to let me share his half table, which worked out great for both of us. I sold a few copies of Eclectic Comics, but the real attention-getter turned out to be my Curriculum Comics. What really made my day was a first-year teacher who looked at the issue on Classroom Discipline and said, "I can't tell you how happy I am to see this. My friends dragged me here to this comics convention and I really needed to see this!" 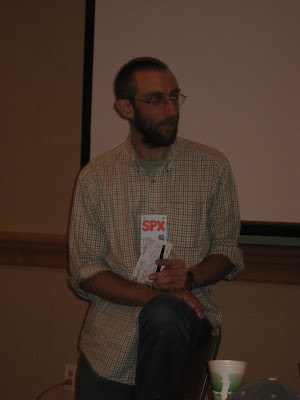 Marek was also the moderator for a panel on Time Constrained comics. There were several artists who make comics using this approach. Examples of this kind of comic include the 24 Hour comic, the lunch hour comic, and others including hourly and minute-by-minute. It was the only panel I attended, and it was a very good one. 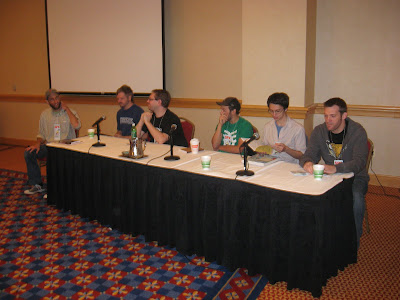 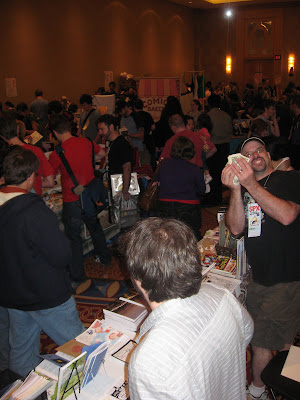 In the picture above you can see me at the right holding the wads of cash...that I brought with me to use as change. 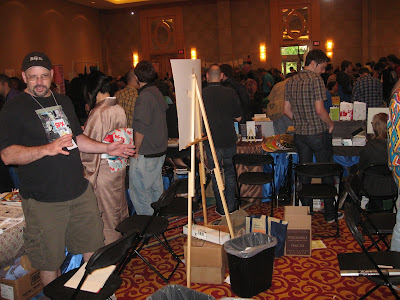 The picture above provides a behind-the scenes look of the tables. As you can see, cartoonists are not the tidiest of creatures. It was tough to navigate back there between the piles of books, supplies, peoples lunches, etc.

Besides selling at my table, it was really great to meet many really great cartoonists in person, talk to them and show them my work -- including Chris Schweizer, Joey Weiser, Jeffrey Brown, John Porcellino, Raina Telegemair, Dave Roman, James Kochalka, Miss Lasko-Gross, and a lot more that I'm sure I'm leaving out.

There were a lot of people there! Here's the official stats:

Paid admissions were 1772 which is a nice increase of 19% over last year. Add to that about 150 free admissions from flyers and coupons we handed out, 500 exhibitors and 150 in staff, volunteers, retailers and press we end up with about 2600 people through the doors.

Your Eclectic Comics series is great, Andy. But Curriculum Comics is what people will remember you for--they're fun, accessible, and brilliant. Keep both up, though, just in case ;-)

I'm jealous of your con-going; I've yet to make it to one. Next summer will likely be our last near the west coast, so we've dabbled with hitting up Comic-Con :-/ I wouldn't mind with visiting so smaller-scale, local cons first :-)

It was nice to meet you at SPX! Sorry I didn't have a lot of time to talk to you more...things are crazy at that show, and this time was no exception! Busy busy!

It was great to finally meet you in person, Andy! I'm so glad the show was good for you - it was my favorite one yet, even with the slogged down rain walking.