Drawings of my dad 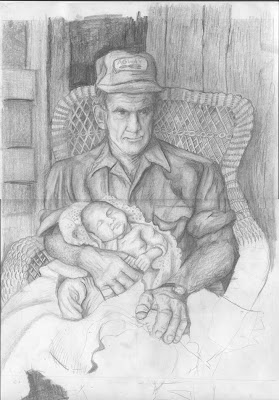 These are a couple pencil drawings of my dad. They were both done in 1988, my first year out of college. One of the things that Andrew Wyeth said that influenced me was when he said he regretted never doing a portrait of his dad while he was alive. I thought, well, maybe I should do some. The one above was a study for a large painting in acrylic that I did. The painting turned out okay, but I like the drawing better. While I was working on it, I was looking at a lot of the synthetic cubism drawings of Picasso and the realistic classical style drawings he did. At one point, this drawing was very cubistic. I think if you look at things that way, it can help when you go to render shapes realistically. I think maybe because of those drawings of Picasso, I thought it looked just fine unfinished like this.

Dad has always been very driven, and sometimes gruff, but when he holds a baby he melts. He will sit and watch his grandkids play as if there were nothing more amazing in the world. 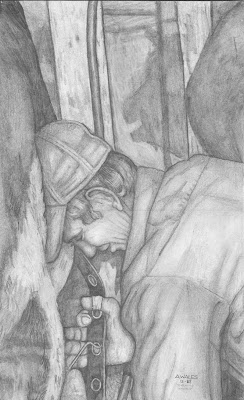 I like the second one even better. I always admired my dad more than anyone else in the world. Here he has kind of a smirk and a gleam in his eye, which is another side of his character. He has always been more hard working, determined and generous than anyone I know. In this drawing, it's a closeup on him as he was attaching the milk machine to a cow. He milked over 52 cows twice a day at that time, with no assistance at all. Twice a day, every day. He never took a day off. He did that well into his seventies. His hands were huge and rough, and he was allergic to a lot of the things he worked with. His hands would be just raw, but he'd bandage them up and keep going. He had forearms like Popeye in those days. When my brother and I were little, he could grab one in each arm and raise us over his head. I used to think, "My dad is Superman!"
Posted by Unknown at 2:05 PM

These are awesome, Andy! I may have to attempt a sketch of my dad at some point--though I'm not sure I'll be able to capture the manly-ness you have ;-)

All joking aside, I think these are some of the best examples of you art work you've posted. Well done.

Nice tribute to your Dad! The drawings are quite successful, too. Yes, the white, unfinished stuff in the first one is effective maybe because the white in the wicker chair starts your eye journeying around to your Dad's face.

Beautiful work, Andy. Do you think it's harder or easier to do a portrait of someone you know well compared to drawing a complete stranger?

Thanks everybody for the nice comments!

Jim, When I did this type of thing, I relied entirely on photos, but I guess seeing this person all my life helped too. For me, I think if I know them it turns out better. If someone hands me a photo of someone to work from, I've only got that one view of them. I wish I had drawn more from life, as you do. I'm trying to rectify that.