Presence in the Gulf

These are drawings I did during the first Gulf War. At that time, I was teaching some high school classes. A lot of the kids could draw really well, but they relied a lot on published images. It was hard to get them to not just copy something exactly. I thought, "Well, maybe we can start by using published images, but modifying and reinterpreting them." I made these as an example of using three separate images and combining them into one image. 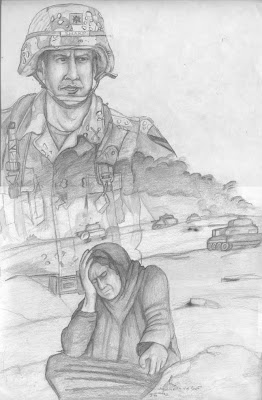 In the one above, I was illustrating a quote from a U.S. official who said, "Our presence in the Gulf will be felt for a very long time." I was trying to show the perspective of the soldier who was just doing his job and the possibly displaced national who was just caught up in it all, without necessarily having any allegiance politically. 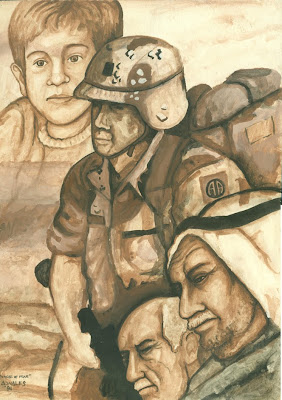 This one I called Faces of War. It's a monochromatic tempera study. I was trying to portray a soldier, possibly thinking of home, the boy thinking of dad, and some Iraqi people.
Posted by Unknown at 1:11 PM