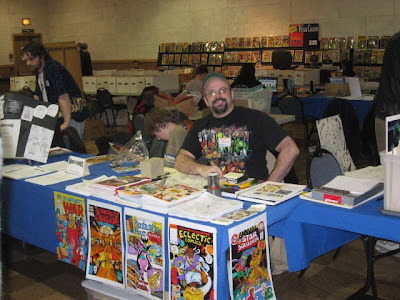 Saturday I spent the day at the Ithacon, a comic book convention in Ithaca, NY. I had a table where I sold my artwork drew and talked to attendees. I made a free sketch for any kid who wanted one, of the character of their choice. I sold a few comics and had a good time talking to other geeks --- I mean, comic book fans. I especially enjoyed talking to other artists and writers including artist Ken Wheaton (Simpsons comics, etc.), artist and animator Warren Greenwood (Teenage Mutant Ninja Turtles, Duck Tales, etc.). Warren is a veteran creator who has worked with Stephen Spielberg and knew Jack Kirby very well. 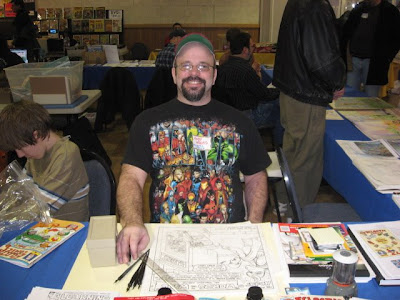 It is always a pleasure to find out what writer Roger Stern is up to. He is also an industry veteran who wrote Superman and Spiderman as well as many others for many years. He's written several New York Times bestsellers and is a fountain of information about comics. He's probably most famous for his "Death of Superman" stories.

I learned that Joe Orsak is now working on a graphic novel detailing the story behind the song The Yellow Rose of Texas and met fantasy gaming card artist Storn Cook.

There were a bunch of other artists and writers there, including some "up-and-comers" like myself. Many comics dealers had tables as well. You can find anything from recent comics to hard to find treasures, to great old comics from dollar bins and even quarter bins. My son David got a ton of comics and cards for very cheap, including a card signed by Stan Lee for practically nothing! (I'm jealous!)

While I was there I had some of the pages I'm working on. I did some inking, and answered questions about the process of making a comic from thumbnails to inks. For any kid who wanted one, I drew the cartoon character or superhero of their choice. I also sold a few comics, which is always good!
Posted by Unknown at 4:17 PM

I've always preferred "nerd" myself. Geek sort of implies a proficiency in math, science, and other techie stuff. But nerd seem to capture my film studying, comic reading, video game playing self quite nicely :-)

I'm jealous of your "Con" trip. Every summer, my wife and I talk about trying to make it to one of the big ones--the San Diego Comic-Con or GenCon in Indiana. But it's yet to happen :-( There is an anime con in Albuquerque coming up; I may check that one out for curiosity's sake :-)

Andrew, it was a pleasure to meet you too! I hope you come back to the next Ithacon. I always have a lot of fun at my tiny, local con. I've never been to San Diego, but I have been to Chicago and Gencon. Those are big cons. Sweet little Ithacon just is so manageable and fun and easy. I love it. Glad you came up!!!

Yo! You look like a happy salesman. I'm glad to hear that you met some of your real life heros - sounds great and interesting. It should be productive for you to get some real, live feedback, too. Nice reach to broaden your horizons!