The ABC Challenge is Back! For those of you late to the party, this is how this works -- The ABC Challenge (Art by Committee) is a sketch game run by artist James Gurney. Once a month he posts a random line from a science fiction novel. The challenge to participants is to illustrate that line however we see it. We do not know the novel or the context of the line. I always choose to make a page or so of comics. I'm trying to piece them all together into a long form comic story. Eventually the whole story will be told in the pages of Eclectic Comics, the comic book I publish.

The line to illustrate this time was: “I should stay here and keep an eye out.” I cheated a little, but I'm like that.

This segment of the story introduces two new characters. The previous actions of our hero, The Mighty Andar have also caused two other imprisoned superheroes to regain their powers. The sketches below illustrate how I came up with them. I thought Major Uranus was a funny name for a character. He's the kind of guy that does the right thing but isn't always nice about it. Evidently this is the symbol for Uranus.

I designed a costume that used that symbol. 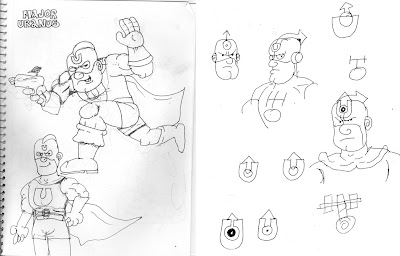 The name Spinclaw came from a name generating device. I liked the image that came to mind because I always wanted to mock the ridiculous headgear that Wolverine, Hawkeye and many other superheroes wear. Ha! ha! I think that you will soon have some more fun with Spinclaw's "literal" mind! I think that you (and maybe only you) can get away with Capt. Uranus! Thanks for the sketches showing your development of these new guys.

You got your ABC entry done early! Taking mine to the last minute myself.

This is very funny. Captain Uranus must spend a lot of time correcting people on the pronunciation of his name. I agree with the goofy headgear observation. Even worse is how a great many female superheroes must be freezing to death since they wear so little clothes.