Last Saturday I had the opportunity to participate in a workshop for librarians called Graphic Novels: Comics in the Library. Many of those attending new kids were crazy about comics, but didn't know where to begin building their collection. I enjoy sharing how I use comics to teach a multitude of essential skills, but every time I participate in one of these I'm convinced I learn as much as anyone else from the other presenters.

Robin Brennar got us started with a presentation called What are Comics? We learned that comics are a format, not a genre. She shared how comics can help with literacy skills -- especially the 21st century set of skills for information in today's very image-oriented information age. She knew about of slew of new really great books I hadn't heard of. Now I have a long list of new things to look for.

Then it was my turn. I like the photo below, because even though it's a little blurry, it looks like I know what I'm talking about. My presentation evolves slightly every time I present. I now include what I call Comic Book Readers Theatre, Cartoon Drawing Building Blocks, and how comics can be used to teach the writing of dialogue and the literary devices of onomatopoia, alliteration, and hyperbole. 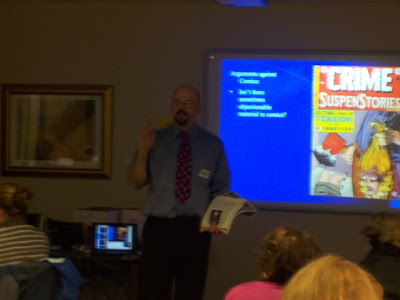 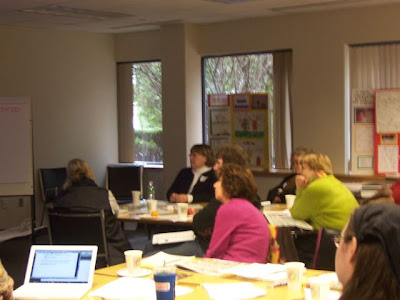 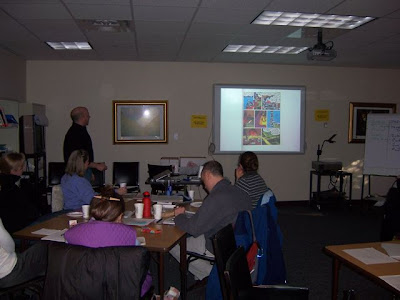 I met one of the other presenters, Tim Callanan the night before. In the hotel lobby we watched the new Brave and the Bold Batman cartoon and talked about comics for two hours. This guy is a walking encyclopedia of practically every comic ever written. Tim is an English teacher, but also writes columns and reviews for Comic Book Resources and has written a book about comics and edited another. We had a great time comparing notes, and I enjoyed his presentations the next day. I think we made a great tag team duo, since I presented the building blocks of drawing comics and he followed up with a panel layout and drawing exersize. His second presentation was 50 Graphic Novelists you must Know.

After sitting for five of six hours, and looking forward to a five hour drive, I decided to stretch my legs a little before driving home. I visitted the Outer Limits comic shop in Waltham. This place was wall-to-wall comics -- new stuff, old stuff, hardcovers, everything. In addition, I've never seen so much vintage retro stuff. If one was so inclined, you could buy one of the toys I had as a kid and threw out for, oh, $300 or so. I'm not about to do that, but it was a great walk down memory lane.
Posted by Unknown at 5:47 AM

Wow! This all sounds really amazing, Andy! I hope to one day make a big enough name for myself that I can present like this. For the time being, however, I'm just glad to be teaching three sections of my "Rhetoric of Comics" course next semester. Actually, I am giving a mini-presentation to a couple of the second-year MA students here on putting together a Freshman Comp. II subjects course :-)