K is for Keres 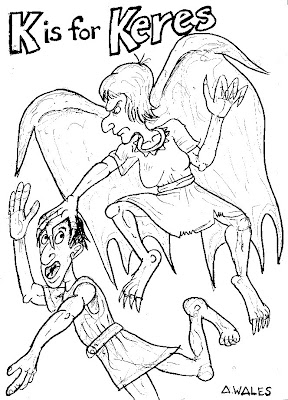 In Greek mythology, the Keres were female death-spirits. They were described as dark beings with gnashing teeth and claws and with a thirst for human blood. They would hover over the battlefield and search for dying and wounded men. As soon as they caught a man who had fallen or one newly wounded, one of them clasped her great claws around him and his soul went down to Hades, to chilly Tartarus.
Posted by Unknown at 6:06 PM