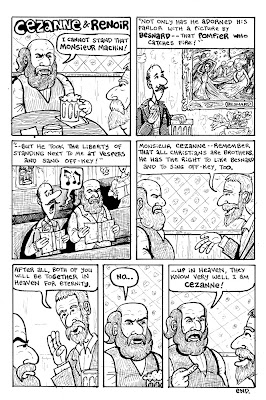 This comic is based on an anecdote related by Renoir's son in his book Renoir, My Father. The "pompiers" that Cezanne referred to were the artists who created the official academic paintings of the time.

Pompier art, or l'art Pompier, refers to the official style that the French Academy promoted during the mid- to late-nineteenth century. The expression ridicules conservative middle class taste which still revered classical subjects and the Neoclassical style in art.

The term comes from a play on words and images. Pompier means fireman in French and calls to mind the firemen's helmets that looked similar to Classical helmets depicted in academic history painting.

Pompier sounds like Pompeii, the site where Roman antiquity stood still under the ash of Mount Vesuvius, which erupted in 79 AD/CE. Pompeii became the go-to tourist spot for young nineteenth century artists who aspired to great history painting. Once there, they were able to study authentic antique ruins and artifacts which they tried to replicate in their paintings about Classical subjects. These artists became known as the "artistes Pompiers."

Pompier also sounds like pompeux, which means pompous, and indeed the official taste of the French Academy during the late nineteenth century was pompous. It was quite satisfied with its traditionally large and theatrical history paintings. In comparison to modest Modernist art which celebrated the contemporary mores, offical academic art (l'art Pompier) seems rigid and out of touch.

He seems a bit grumpy.

Your posts are always so informative, as well as entertaining. Thanks!