The Mighty Andar by Jeff Lemire 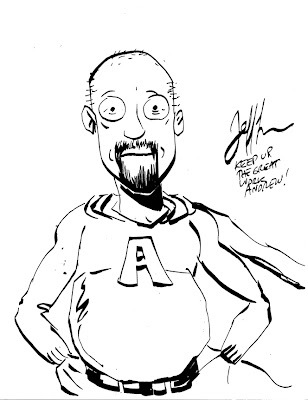 This drawing is of my character The Mighty Andar as interpreted by a really great cartoonist named Jeff Lemire.

Something I've picked up from self-publishing comics guru Alec Longstreth is the idea of sending my comics to people I'd like to have read them. I've sent copies to people whose work I admire, with the invitation to make comments or even do a quick sketch for the letters page. (I know, I've got a lot of nerve, don't I?)

Lemire makes great comics for grown-ups like the Essex County graphic novel trilogy that USA Today called "a devastatingly beautiful series of tales" that "highlighted the human experience from the magic in a child's imagination to the sorrowful regrets of old men". His new series is Sweet Tooth, "a post-pandemic world devolved into a population of human/animal hybrid children being hunted by paranoid humans."

Labels: Cartoonists I like, Mighty Mailbag, The Mighty Andar

Look at you and all your mad props from renowned comic artists!