A search from Google reveals some other artist's named Wales. I'm not sure if they are any relation or not. My family is descended from Nathaniel Wales, a ship's carpenter who sailed from England to the new world in the late 1600's. We have a family tree notebook, and there's at least one Nathaniel or Nathan in every generation. I'll have to look into it more to see if they're related. They might be shirt-tail relations! 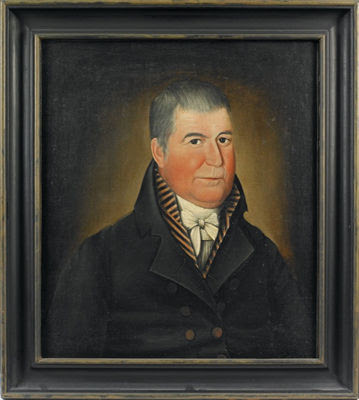 This 1806 naive portrait is attributed to an artist named Nathaniel Wales. The title of the painting is Portrait of Captain Nathan Sage, as are the paintings below. 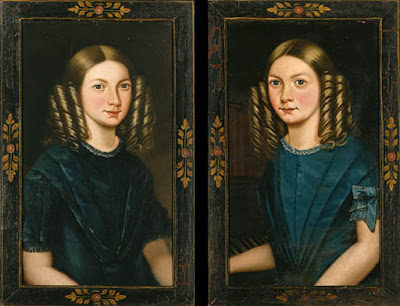 I think it's interesting that there was a marine artist named George Canning Wales (1868-1940). This is what I was able to find out about him online, along with some of his etchings: 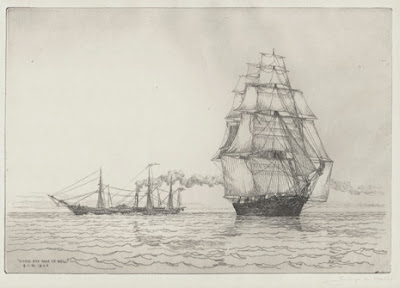 George Canning Wales' passion was for ships and the sea. As a youth, he was around the wharves in Boston before the steam ships replaced the romantic sailing vessels. In his own words, he sketched obsessively the ships that arrived in the Boston area, recording the ships and their riggings. He spent the mid-part of his life as a professional architect before turning to printmaking around his fiftieth birthday. His early love of ships and the sea is present in his etchings and lithographs. 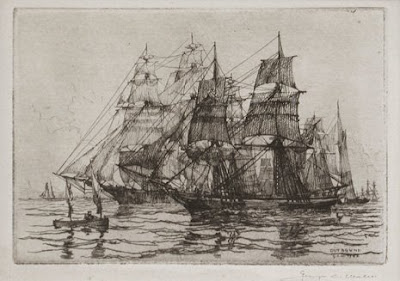 George C. Wales was born in Boston in 1868. He studied architecture at the Massachusetts Institute of Technology from 1885-88. His first job was with the architects, Peabody & Stearns; founded his own architectural firm in Boston 1893-1924; studied etching in 1917 with William M. Paxton; and produced his first etchings that year. He studied and mastered lithography in 1923. His first exhibition was held at Goodspeed's Book Shop in 1921. The venerable, but now closed, Boston gallery and book store published a catalogue raisonne of the artist's prints in 1927. His prints are in the permanent collections of many museums and institutions including The Boston Public Library, Library of Congress, New York Public Library, Peabody Museum, Old Dartmouth Historical Society, The British Museum, Victoria and Albert Museum, and the U. S. Naval Academy. 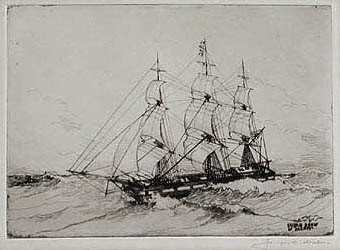 Hi, my mom, Lois Wales Stanton is decended from Nathaniel Wales who's family was prominent in Yourkshire, England and of acient origin. Nathanial Wales (b. 1600), a son of John Wales of Idle County, Yoork, sailed on the "James" of Bristol on June 4, 1635 with 100 passengers from Yorkshire, under Rev. Richard Mather. Nathanial was a shipwright by trade, a member of the Church of England. He arrived in the new land grantee of land in 1637 and made a freeman the same year. After 20 years they moved to Boston. With him went his son, Nathanial Jr., who had married his cousin, Isabel, a daughter of Mary Wales Atherton, who had also come on the "James"...and on it goes! Anyone out there also connected to this family?