Now you can read a comic with musical accompaniment!

The art of music often inspired other artistic endeavors. What happens when we mix comics and music? At 52 Comics Challenges our assignment this week was to "Draw a Song". We were to pick a song that has lyrics and a strong visual motif and illustrate a portion of it in a 1-2 page comic.

Well, I think I chose something a little too ambitious to try to complete during the first week of school! I've always loved the music of Mark Knopfler, former front man for Dire Straits. The lyrics of many of his songs could stand alone as poems. I chose his song "Cannibals". To me it's always been a song about a father and his son's love for each other, and the things we sometimes say to kids just to get them to go to sleep. You'll notice I had to add another page! -- and that I had to move a couple of lines in the song around. 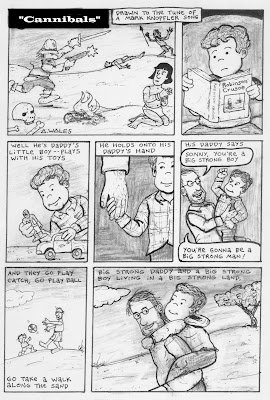 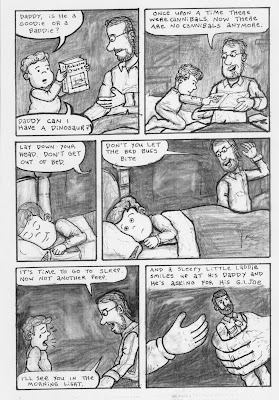 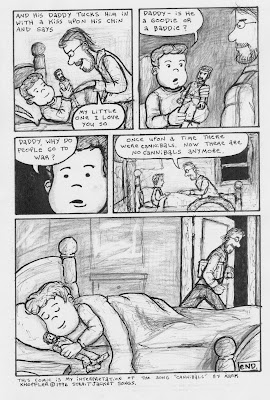 nice work. about how long does a page take - u have very intricate shading. cant wait to see the next challenge.

Thanks a lot, Adminboy! It's great to get feedback!

Let's see, for pages like these, I'd say I can get them sketched out and inked in about 3 hours/page. Not that I ever get three hours straight to work on one!

I don't typically shade like that. I did these as line drawings and thought it needed something. I tried shading with pencil and blending stump as an experiment and I like how it turned out.