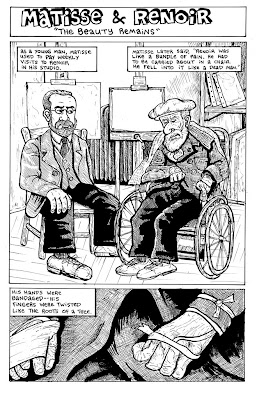 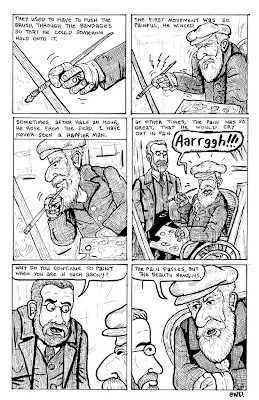 This comic strip illustrates an anecdote about young Matisse's visits to Renoir. Renoir battled severe rheumatoid arthritus and fought to overcome the disease so he could continue creating his masterpieces. Though at times he suffered greatly and the disease became crippling, he continued to persevere through his work. According to arthritis.about.com

Around 1898, if not before, Renoir suffered his first severe attack of rheumatoid arthritis. It was not long though before the rheumatoid arthritis became excruciatingly painful and gave him more trouble. In 1904, Renoir weighed only 105 pounds and was barely able to sit. By 1910 he could not even walk using crutches and became a prisoner in his wheelchair. His hands were completely deformed, like the claws of a bird. A gauze bandage was used to prevent his fingernails from growing into the flesh. Renoir was unable to pick up a paintbrush at this point and it had to be wedged between his fingers. He continued to paint everyday unless an attack of arthritis forced him to lie on his bed where a wire construction protected his body from being touched by his bedclothes.
There were episodes when Renoir was completely paralyzed. He would allow the attack to subside, then continue where he left off at his easel. It has been said that although Renoir was old, sick, and decrepit there was never any despair or weariness in his art. He never allowed it to be invaded by feelings of envy or anger towards those in good health. The hundreds of works he produced during the last few years of his life were an ode to happiness and joy.

Wow. I love reading your historical pieces. This one was so sad yet so very inspiring.