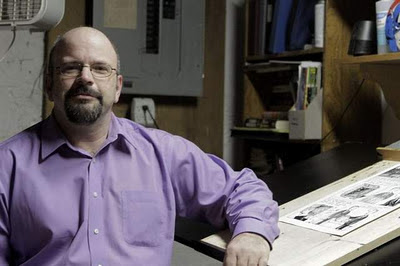 It just occurred to me that I never posted a link to this article about my comics here. A very cool reporter called and interviewed me about my comics. A photographer came and photographed my basement "studio". At first I was embarrassed by the fuse box in the background, but then I thought -- actually, that's part of the message. Anyone can do this, anywhere!

They have since taken the article down from their archives, so I will post the content of the article below:

Andrew Wales is like a caped crime fighter from a comic book who hopes his noble notions and altruistic actions inspire others.

The writer/artist is perfectly happy with life on the fringes of the cutthroat comic book business.

And he doesn't mind putting more emphasis on plot lines than the bottom line -- as long as his stories encourage readers to grab some pencils and paper and start drawing.

In the fifth and most recent issue of his self-published anthology, "Eclectic Comics ," the Athens Borough Borough resident has crafted autobiographical, educational, even nonsensical stories, and imbued them with an infectious free spirit.

"It is my life's purpose to try to inspire as many people to find a place in their life for creativity, whether it is comics or something else."

Wales isn't just the creator of the new comic -- he's also the star. Some stories capture the joys of raising Nathan, who is unusually meticulous about keeping his comics in mint condition for a 5-year-old.

Others uncover humor in the routine moments of his 8-year marriage to Kristan, who's been known to chide him for his inability to find the mayo in the fridge.

In one tale, he tangles with bureaucratic red tape as his alter ego, The Mighty Andar.

And Wales has even included his origin story -- a touching look at how one teacher fostered his love for art.

"Andrew is trying to use himself as an example that if you have a pencil and paper, you can give it a shot," said Jared Aiosa, owner of the Elmira shop Heroes Your Mom Threw Out.

"He's trying to show it's not an exclusive format like oil painting. You don't need oil paint, brushes, all that. You just need a pencil and some inspiration."

Wales' passion for comics and his crusade to motivate others bleeds into the rest of his life like a spilled tray of watercolors on a canvas.

He is in his second year of teaching art at Harlan Rowe Junior High School in Athens after teaching elementary school art for 22 years.

Although he introduces his eighth- and ninth-graders to many types of art, they seem to enjoy comics. In fact, he has used them and their cousins, comic strips, to open a dialogue about bullying, breaking the ice with a "Peanuts" strip depicting Lucy punching Linus. "There are published curriculums with videos and posters, but the kids often call them fake or boring and they can sometimes be kind of preachy," Wales said. "My idea was, what if we take an art-based approach to this? What if we read comics in which bullying takes place and used that as a discussion starter? What if we talked about how to resolve conflicts or stop bullying and the kids made comics illustrating what they learned?"

Wales believes so strongly that comics can be used as a teaching device -- especially when it comes to bullying -- that it's the subject of the doctoral dissertation he's writing as he pursues his studies at Northcentral University.

"Andy is inspiring to the kids and his fellow teachers," said Brian Manchester, a special education teacher at Rowe. "Several of the kids are amazed that he's created these comics. They may not do as well as Spider-Man, sales-wise, but he's an example that you can create something on your own if you have the passion."

"I think that it is good for art teachers to be an example for their students -- to some extent to be a practicing artist," Wales said.

"As art teachers, we need to be jacks of all trades and master every art form enough to teach it, but also be a master of one," he said. "Our students can see that these are the kind of things artists do, and it also keeps the fire going in the art teacher. We are still learning and developing our skills."

Anyone, anywhere - nice point! Good to read the article again - helps my memory!

Wonderful Article. Glad you posted it. I found it quite encouraging.