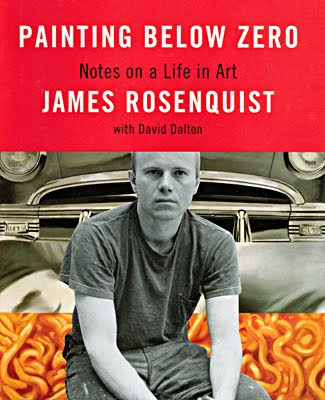 I just read a fascinating book -- Painting Below Zero: Notes on a Life in Art by James Rosenquist. It is very conversational in tone, as if you were sitting with the artist as he reminisced about his career, his ideas and his friendships with artists like Warhol, Lichtenstein, and Rauschenberg. Rosenquist was one of the major artists of the Pop Art movement and is still working today. I highly recommend this book. Below are a few quotes from the book, along with some of his work. 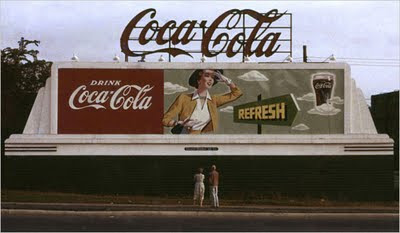 After being trained as an artist, Rosenquist made his living painting billboards for several years.
He eventually applied what he learned in this trade in his work as a fine artist. 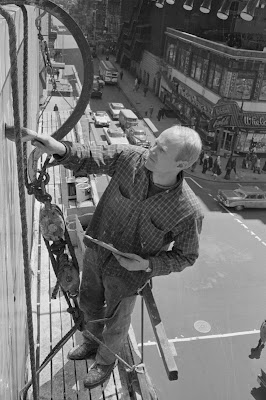 "When you look at a collage by Schwitters, with disparate things stuck side by side and laid on top of each other -- a newspaper, a train ticket, paper money, a torn piece of blue paper, a fashion illustration, an envelope with a stamp on it -- you involuntarily make connections. With collage, you are free to create your own narrative. That and an element of mystery is what first attracted me to the process." 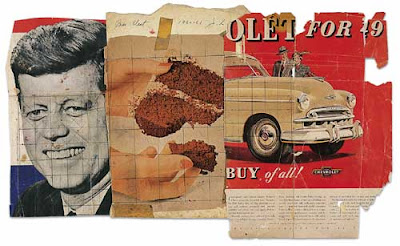 Collage used in the creation of President Elect 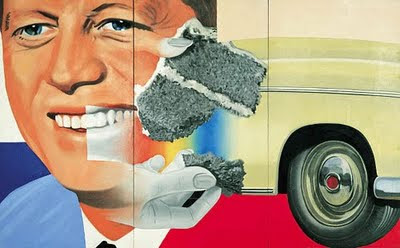 "By the time I was a teenager I'd found my way out by picking up pieces here and there, like clues to a puzzle. I'd found a way of looking at the world as disconnected images brought together for an unknown purpose. Without realizing it, I deliberately sought out the incongruities that would match my memories." 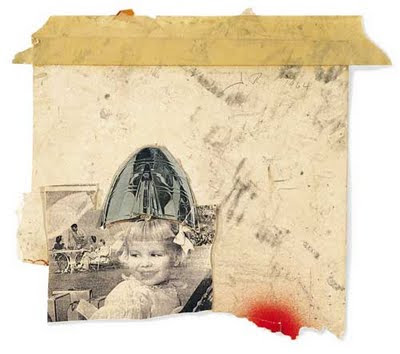 Collage used in creation of F-111
On Ideas

"Sometimes ideas come through the window, floating in from somewhere. That sounds like a poetic way of describing it, but I mean it quite literally. For all I know it might be electromagnetic signals or extra-terrestrial rays or, as they used to say in the old days, a visit from your muse. All I had to do was snatch them out of the air and begin painting. Once that idea came to me, everything seemed to fall into place -- the idea, the composition, the imagery, the colors, everything began to work."

"Often you start out with an idea or a notion and you don't know whether it's going to come off. You hope that by the time you actually get it down, there is something to it, but when things come out of thin air you don't know what they are. Ideas come unbidden, and you don't understand their meaning or know what they're going to become and that's the best thing about them. You just do it -- and then try to figure it out."

On the Juxtaposition of Disparate Images

"That was how I learned to interpret the world: as loose, unstable images whose meaning was enigmatic, and that became the template for my juxtaposition of disparate images. They are at the core of my interest in collage -- an unconscious attempt to make aesthetic sense out of the nonsense I saw around me. Collage is a very odd thing. Incongruous images pushed up against one another for some reason shock the psyche. A juxtaposition of opposites disturbs you: if the elements don't connect, it sets your mind off. It remains such a relevant art form because it interprets the fragmentary nature of urban life." 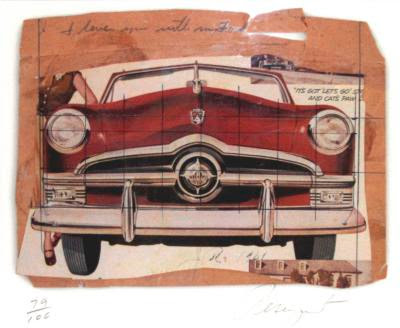 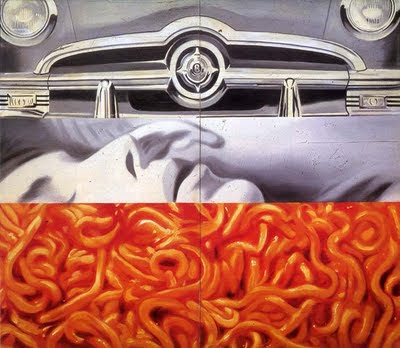 I Love you with my Ford

"Popular culture isn't a freeze-frame; it is images zapping by in rapid-fire succession, which is why collage is such an effective way of representing contemporary life. The blurr between images creatres a kind of motion in the mind. With collage there is a glint, a reflection of modern life. If, for example, you take a walk through midtown you might in quick succession see a street vendor, the back of a girl's legs, and then out of the corner ofyour eye catch a glimpse of a taxi...you see parts of things...and yourationalize them into a scenario. It all happens very quickly; the experience is almost subliminal." 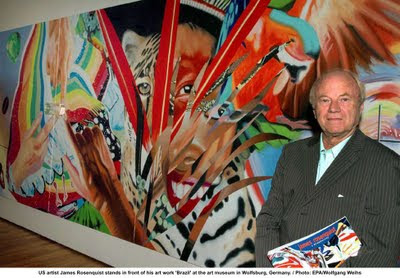 Recent photograph of Rosenquist
Posted by Unknown at 2:33 PM

I've always loved his work. I gotta check out that book.