Teaching with the Power of Comics at Alfred University 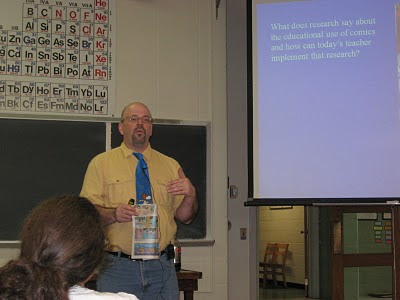 Yesterday I had the pleasure of presenting three workshops at Alfred University. I shared many of my projects that involve integrating reading and writing with art through the captivating medium of comics. Some of the activities participants tried were comic book scavenger hunts, comic strip conversions, creating original cartoon characters and comic book reader's theater. Here's a little more about each of these activities. 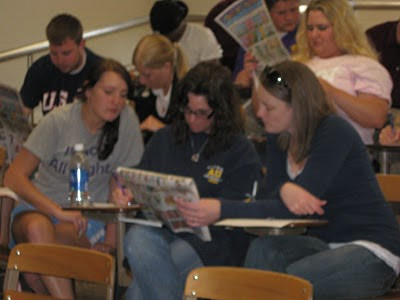 (1) Comic Strip Scavenger Hunt. As participants arrived, they were given their text for class that day -- last Sunday's comics sections from The Daily Review. Our local newspaper offers a Newspapers in Education program, and they provide me with multiple copies of the Sunday Funnies. I use them in my classes, and when I take the show on the road.

After doing some round robin reading from them, we searched for examples of onomatopoeia and other literary devices we want to help our students understand. 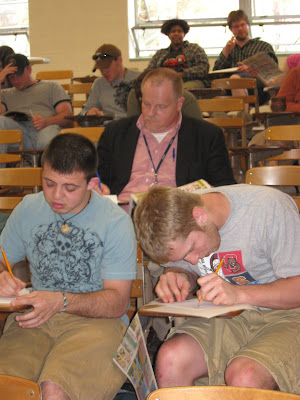 Both teachers and faculty participated. In the center of the picture above is my old chum from Mansfield University, Tim Cox (who is now Dr. Cox, English Professor).

(2) Comic strip conversions. As far as I know, this activity was created by Athens teacher Lauren Schwenke. I got the idea from her and have never seen it anywhere else, but it's a great way to teach the writing of dialogue and words to use "instead of said." What this activity involves is rewriting a comic strip into prose. Often people are surprised at just how much they need to write to translate a brief comic strip. It really is true that a picture is worth a thousand words. 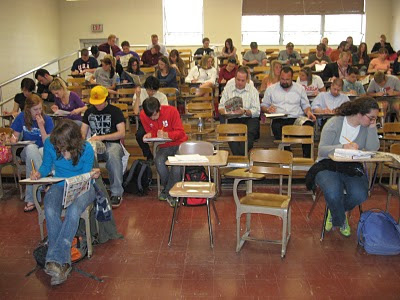 I think this was the largest group I've ever done this with. There were about 50 participants in the last session. 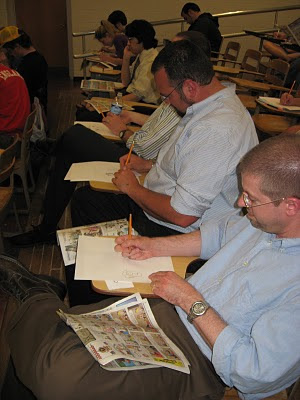 (3) Creating original characters. I always get a kick out of asking participants to draw. Sometimes that includes "non-artists" who may not have attempted a drawing in years. Most folks are usually pleasantly surprised after trying my method. One participant in the morning said, "This is the best drawing of a person I've ever done." What we do is copy various facial features from many different characters. Even though we're copying, by combining single elements from multiples sources, we create characters that no one's ever seen before.

(4) Comic book reader's theater. This is when I put a comic strip up one panel at a time. Participants "volunteer" (are coerced) into playing parts. Many really enjoy hamming it up and everyone's a good sport about it. The comic we enacted was The Animal Fable, a comic I drew for Curriculum Comics #2.

In addition to the above activities, I shared some other information about using comics to teach. I hope that it got everybody thinking about the potential for using this fantastic art form to give students a chance to "show what they know" in creative ways.
Posted by Unknown at 12:58 PM

Very cool! Though most creative writing professors frown on using words other than "said" or "ask" to introduce dialogue ;-)

Congrats on another workshop! That's great that you spread your love of comics.

Outstanding. Teaching at yet another University. You're influencing many toward the joy of comics.