Comic cover re-do's are fun drawings for me to make. I take an existing comic cover and redraw it in my own style. In this case, the cover appealed to me because of the floating head motif -- a common design solution in comics. It was the 90's -- a time of gimmicky covers like reflective foil elements like the one above. This makes it impossible to scan!

I also noticed that this artist gave many of these iconic characters hairstyles similar to celebrities of the time period. This made this piece ripe for parody! 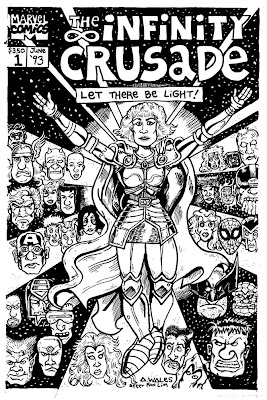 Here I have redrawn the cover in pen and ink. I noticed that the villainess emanates beams of light. The heroes caught in that beam are fearful or hypnotized. These were abducted by the Redemptress. Those who are not are fierce and angry. They're ticked off because their friends were kidnapped. 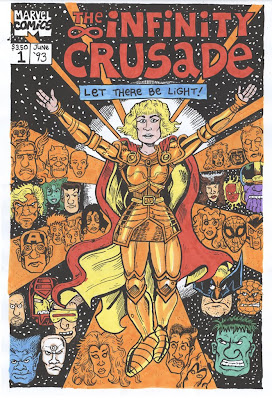 Here I've made a copy of the drawing and hand colored it with Crayola markers. To be honest, the story was not that great -- but a really fun cover!
Bonus Question: Which non-Marvel character has been inserted in the lower left section? (Five points).
Posted by Unknown at 11:48 AM

Oh my! Joan of Arc reborn - beautiful armor, great coloring. I give up, whose hairdo?

I'm not exactly sure who -- but they all seem to have MTV 90s makeovers!